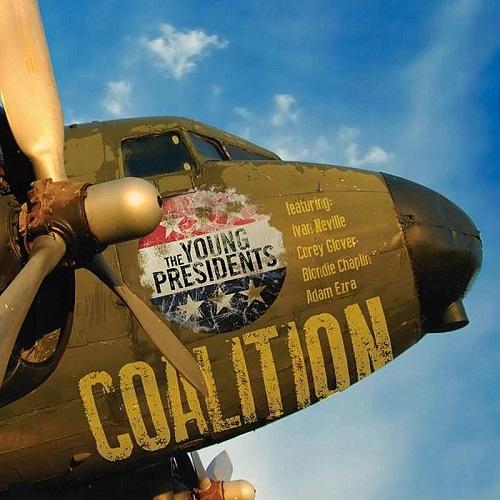 The Young Presidents is a two-member rock band from New York City that blends classic rock & roll with a dash of 90′s alternative. Using a back-to-basics approach blended with a modern sound, The Young Presidents returns to the great “power trio” of rock: guitar, bass and drums. Guitarist/vocalist Jake Hertzog and bassist/vocalist Mitchell Kaneff are united by their passion for rock music and the band is inspired by everything from Cream to Train, from The Jimi Hendrix Experience to Nirvana – just a few of the influences evident on the band’s recently release album, Coalition. Mitchell Kaneff: Living proof that you can do it all, Mitch seamlessly juggles being CEO of his company, Arkay Packaging, with the writing and publishing of his book Taking Over: Insider Tips from a Third-Generation CEO and his musical career Jake Hertzog: A distinguished Berklee College of Music alumnus with 3 critically acclaimed jazz/fusion records, Jake’s prior experience playing with Naked Brothers helped catapult him into the pop world – and his extraordinary expertise in composing, writing, singing, guitar playing and directing keeps him there! Coalition: Inspired by the success of their first album, Freedom of Speech, The Young Presidents became involved in an innovative project, inviting guest artists into the limelight with them. Teamed up with renowned Grammy-winning producer Rob Fraboni and collaborating with some of the world’s greatest talent (Corey Glover, Blondie Chaplin, Ivan Neville, Anton Fig, and Adam Ezra to name a few), Mitch and Jake recorded all original material in Avatar Studios in New York City. The result: Coalition. This eclectic and innovative rock album, released digitally, as well as in vinyl and CD, is must-have for anyone interested in cutting edge music and inspiring vocal tracks. https://itunes.apple.com/us/album/coalition/id889401794
Receive updates on upcoming WMR
releases and promotions! Click below to
Sign Up now!